Vegas Valley Sports Beat
January 18, 2020January 20, 2020 Charles Ramos Jr 777 Viewsbig dicks, Dining, food, lasvegas, nevada, news, Pahrump, pizza
Greetings sports fans and welcome back for yet another exciting episode of Vegas Valley Sports Beat. The unofficial sports and entertainment capital of the world. As I creep up slowly but steadily on my third year of writing this wonderful column for Vegas Valley News, to whom I am eternally grateful by the way, I hope to be able to write more in the future, but for now, I’m doing the best I can and I hope you will all bear with me. My back is much better now but it still hurts and the injury increased my normal pain level but such is life. The good news is I’ll get over that too.
Let’s get right down to the nitty-gritty world of sports now and let me tell you about the Big Dick’s I had the other night. Oh my God, you talk about yummy! Four of us dined on just one of Big Dick’s large Deluxe pies and there was enough Big Dick’s leftover to feed 3 more people. I couldn’t even finish my share of the leftovers that we did split. We had more Big Dick’s than we could handle.
Pizza aficionados in Pahrump, Nevada are in on the play on words, and all the Big Dick’s jokes and they are a lot of fun, especially if the other person doesn’t know what you’re referring to. But Big Dick’s Pizzeria is anything but a joke. I know the owners to a small extent and I know that they give a lot of good back to the people in the community. I know because when I was down they gave me a little boost back up. I had only just lost my house and they gave me and my tenants a large pizza and said at least you won’t have to worry about what to make for dinner tonight. Not because we were begging for food or for any discernable reason but that they cared. In my experience, not many business owners or people, in general, would do something like that. Big Dick’s large pizza is like 16 feet across. If you don’t have help eating a large Big Dick’s you better have a lot of space in your refrigerator for the leftovers.
Okay, 16 feet is a slight exaggeration but it is a really really big pizza just the same. A 24-inch pizza is nothing to play with. That is some serious freaking pizza and nobody does it better or satisfies hunger better than Big Dick’s. They’re open every day from 11 am to 8:30 pm including Sunday. They have a wide variety of other delicious dishes available on the menu if pizza is not your thing including sandwiches, calzones, stromboli, burgers, or they have complete meals including lasagna and Chicken Alfredo. They have many tantalizing appetizers and mass quantities of tasty-sounding munchies, specialty salads like the Antipasto and chef salads, specialty pizzas, nachos,  jalapeno poppers, mac and cheese tots, fried zucchini, spicy fried pickles, breadsticks, loaded potato wedges, and hot wings aplenty. 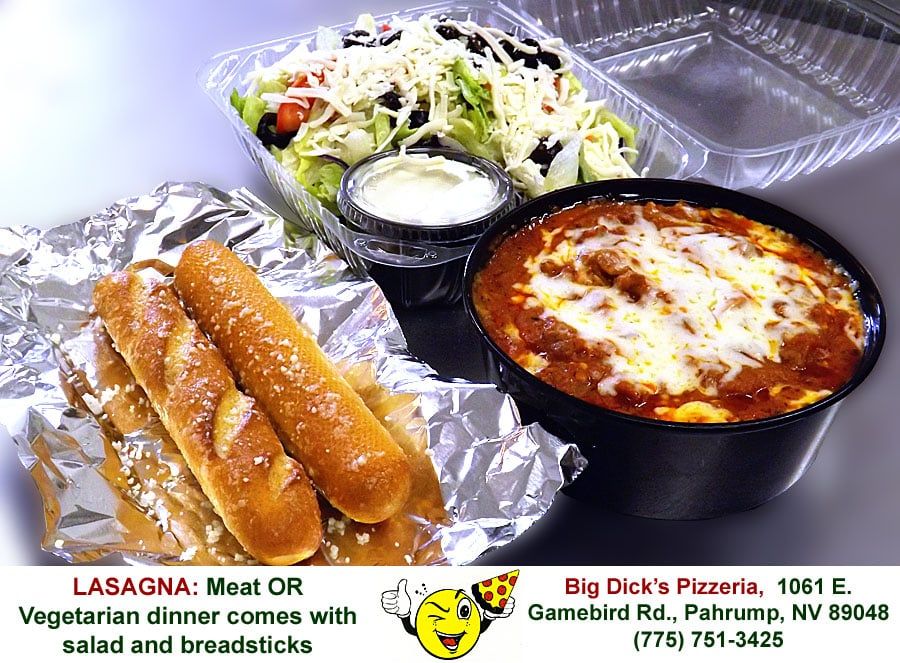 For those who crave great food and a variety of choices, you can have some different Big Dick’s every night for a week and not get tired of the same old boring pizza menu you only find in some other, lesser establishments.  For the cake-loving fat kid in all of us, Big Dick’s will tempt you with decadent desserts that are sure to keep Oprah shilling Weight Watchers for all eternity. The best part of all is the delivery is free.
Since the last time I had the opportunity to visit Big Dick’s physical restaurant, they have moved from Gamebird to a new location at 3971 E. Kellog Road (775) 751 – 3425 I had been wondering if they would deliver this far from the new store so I gave them a call and sure enough the girl who took my order said it would be delivered in an hour. The whole transaction was very fast and friendly and took no more than 3 minutes.
The driver showed up a little early. He was very courteous, the pizza was hot and delicious, and for $35 you could easily feed a family of 7 on just one large. Keep in mind $35 was for Big Dick’s deluxe model with everything on it. I didn’t know what everyone else liked so I figured I’d throw everything in there and let the picky people pick out the parts they were picky about. Not that there’s anything wrong with that. Big Dick’s will do that for you though if you want the pie sectioned off with several different topping configurations per your specific needs and desires.
It’s true, we do have a lot of fun with the name of Big Dick’s as I’m sure many of you dirty-minded fans can imagine. But of course, it’s all in good fun. I have been a lifelong Aficionado of good pizza and I like to think that I know good pizza from bad pizza. Big Dick’s are the best. Hands down.
If you should ever happen to find yourself in Pahrump, first of all, my sincerest condolences. Second of all, you should seriously consider having some big dicks while you’re there because you never know when you might get another chance. Remember, when you say Big Dick’s you’ve said a mouthful.
Be sure to tell them Charles sent you. It won’t get you anything, I’ve just always wanted to say that in print. 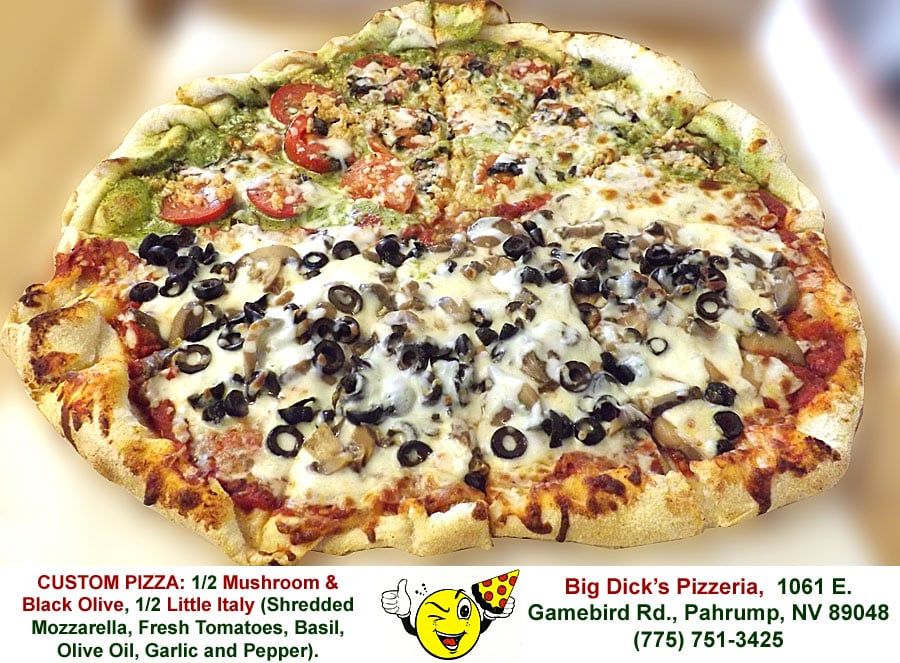