Greetings sports fans and welcome to another beautiful Finally-it’s- Friday here in lovely sun-drenched Las Vegas, Nevada. Turning now to the wonderful world of live entertainment let me tell you about last night at the South Point Hotel and Casino’s Showroom where Frankie Moreno really wowed the audience.

By a show of hands at Frankie’s request, the number of people in attendance last night were there for the second time. Or more as in my own case. Last night was my 3rd time going to see Frankie and the band perform live at South Point and I was not disappointed in the least.

With my best friend, Jason in tow we arrived early to find a flurry of activity buzzing around the entrance to the Showroom. This flurry was centered mostly around the fearless leader of the Frankie Moreno Army, Kathy Cornelius and the ladies who run the fan-stand. My good friend and local real estate maven extraordinaire, David Lamer was there already, streaming live video feeds from the casino floor.

I got caught in one of those and all I can say is that if I didn’t come off like a total dork it certainly wasn’t for lack of trying.

The music was great and the crowd was awesome as always. Many very nice people were in attendance last night including Mrs. Nevada, the very lovely Mrs. Yelena Anter, and her court could be seen dancing in front of the stage along with myself and a bunch of other folks who seemed to be enjoying the music and themselves immensely. I know I did so anyone who feels like they did not

Last night was fan appreciation night and the FMA thought to give away a few prizes prior to drawing for the autographed guitar but that this was another one of those so well thought out plans that went astray was quickly in evidence.

Why yes, my phone’s camera does suck. Thank you for asking.

After having drawn a bunch of tickets whose owners all live out of state, drawing, Kathy Cornelius’s ticket once and another girl’s ticket twice which BTW got her booed by the entire audience who seemed to feel like the drawing was rigged. I did, however, admit that I felt bad about booing too because I do know that she would not have wanted for that to happen nor did she want any of the offered prizes. I hope she took it all in the spirit of fun which I believe it was intended by everyone; myself included.

Frankie’s parents were in attendance last night as they have been every night that I’ve seen the show, as were many locals and tourists alike. The raffle for the Frankie Moreno autographed guitar signed by Frankie and all of the members of the band. 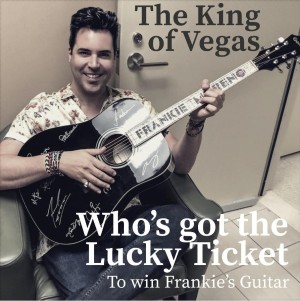 Frankie is starting a Scholarship Fund for the Nevada School of the Arts.  He will raffle off this guitar signed by the entire band on Saturday, May 26th on his Facebook page.  Tickets are $5.00 each or 25 tickets for $100. All proceeds from the raffle will go to the Scholarship Fund.  You may purchase tickets at his upcoming shows through May 24th or by going to the contact page at; frankiemorenofanclub.com for information.

Do you have your reservations for June 8th and 9th at the South Point Showroom yet?  There’s a special package being offered for a 1 night’s stay, plus 2 tickets to Frankie’s show plus a food credit of $20.  If not then you need to call 702-796-7111 for reservations right away if not sooner. The music is always great and the company you find there is always top notch.

AND NOW A FEW WORDS FROM FEARLESS LEADER.

*Frankie will be entertaining folks at the Lake Las Vegas Food and Wine Festival May 27th.

FRANKIE WILL HAVE A NEW CD THE SUMMER OF 2K18!!
REMEMBER THAT YOU CAN PURCHASE FRANKIE MERCHANDISE AT ANY OF HIS SHOWS
WE HAVE CDS, FRANKIE FLASKS, SHOT GLASSES, HATS, PINS, T-SHIRTS, COFFEE MUGS, FRIENDSHIP BRACELETS AND MORE

Have you been to a show recently?  Whatever venue you have attended, go to Yelp and give Frankie a 5 star* review.  This helps ensure that we continue to see Frankie at these awesome venues!

Thank you for supporting Frankie and the FMArmy. Be sure to follow the Rules of Engagement! We truly appreciate your support!

TRUMP, AND THE TROUBLE WITH TRIBBLES

July 1, 2019 Charles Ramos Jr Comments Off on TRUMP, AND THE TROUBLE WITH TRIBBLES

All day Happy Hour at ReBar

February 2, 2018 The Editor Comments Off on All day Happy Hour at ReBar

November 15, 2018 The Editor Comments Off on Vanderpump Cocktail Garden to Open at Caesars Palace
Nightlife

June 30, 2020 The Editor Comments Off on TRIO OF REBELS TABBED WGCA ALL-AMERICAN SCHOLARS

February 24, 2020 The Editor Comments Off on REBELS FINISH TIED FOR FIFTH IN HAWAII

April 1, 2018 Charles Ramos Jr Comments Off on 38 CASES OF HEMORRHAGIC BLEEDING AND 1 DEATH LINKED TO SYNTHETIC MARIJUANA IN ILLINOIS

15 MINUTES OF FAME OR SHAME?

YOU CAN’T SUSTAIN ANY LIE NOR HIDE THE TRUTH

Statement from the Office of the Former President

The Saddest And Darkest Inauguration In US History

SHOUT IT FROM THE ROOFTOPS – THE EMPEROR IS NAKED

NFL CENTERS, WORLD LEADERS, AND THE MEN WHO LOVE THE SMELL OF THEIR POSTERIORS

Republicans must reject a second impeachment of Donald Trump.

VEGAS VALLEY NEWS DENOUNCES ALL FORMS OF VIOLENCE AND INSURRECTION

WHY’S PELOSI WASTING OUR MONEY ON ANOTHER SUPERFLUOUS IMPEACHMENT?

WE THE PEOPLE WILL NOT BE SILENCED, OR RULED BY TRAITORS

CannAmerica “Brand of the Free” Provides Update on Nevada

October 29, 2018 The Editor Comments Off on CannAmerica “Brand of the Free” Provides Update on Nevada

AND NOW, THE WINNER FOR BEST IN SHOW IS,…

August 10, 2019 Charles Ramos Jr Comments Off on AND NOW, THE WINNER FOR BEST IN SHOW IS,…

Short Film “Lou” Teaches Us a Lesson in Love and Loss

March 29, 2018 Cindy Mich Comments Off on Short Film “Lou” Teaches Us a Lesson in Love and Loss

April 27, 2019 The Editor Comments Off on Sting: My Songs The Las Vegas Residency Coming To Caesars Palace

April 11, 2018 The Editor Comments Off on CAIFANES ADDED AS CO-HEADLINER WITH BANDA MS PERFORMING AT MGM GRAND GARDEN ARENA

THE SMITH CENTER ANNOUNCES OVER 40 NEW SHOWS, INCLUDING SARAH BRIGHTMAN, THE BEACH BOYS, BERNADETTE PETERS AND BROADWAY HIT ‘COME FROM AWAY’

November 17, 2018 The Editor Comments Off on THE SMITH CENTER ANNOUNCES OVER 40 NEW SHOWS, INCLUDING SARAH BRIGHTMAN, THE BEACH BOYS, BERNADETTE PETERS AND BROADWAY HIT ‘COME FROM AWAY’

“LIONEL RICHIE – ALL THE HITS” AT PLANET HOLLYWOOD RESORT & CASINO

February 26, 2018 The Editor Comments Off on “LIONEL RICHIE – ALL THE HITS” AT PLANET HOLLYWOOD RESORT & CASINO

November 6, 2018 The Editor Comments Off on North American Medical Marijuana Market Continues to Grow as Investments Pour In

Michael Gentile: A Mix of Hollywood and Humility

September 5, 2019 Cindy Mich Comments Off on Michael Gentile: A Mix of Hollywood and Humility

REBELS SHUT OUT SYRACUSE, RALLY FOR COMEBACK VICTORY OVER UTSA

February 24, 2018 The Editor Comments Off on REBELS SHUT OUT SYRACUSE, RALLY FOR COMEBACK VICTORY OVER UTSA

December 17, 2018 The Editor Comments Off on SOULCYCLE AND THE CHAINSMOKERS LAUNCH RETAIL COLLABORATION WITH CELEBRATORY RIDE AT SOULCYCLE LAS VEGAS

February 13, 2018 The Editor Comments Off on Giada De Laurentiis Welcomes Guests to Pronto by Giada, Now Open at Caesars Palace

February 22, 2018 The Editor Comments Off on SHINTARO BAN EARNS MW MEN’S GOLFER OF THE WEEK HONOR

BACK IN THE SADDLE AGAIN

December 30, 2018 Charles Ramos Jr Comments Off on BACK IN THE SADDLE AGAIN