In breaking news, it has just been brought to my attention by way of the White House Press Secretary’s office that, at 8 p.m. Eastern Standard Time, President Donald Trump will formally announce that he is stepping down from the presidency due to the extreme pressures related to the job. The president reportedly stated to an as yet un-named source close to the First Family that, “Presidenting is hard. I didn’t think it would be this hard. Nobody told me all this crazy presidenting stuff was going to be this hard.”
In a separate release from the White House, the president’s chief of staff, reportedly, says that the president has succumbed to the intense moral pressure of his recent impeachment. He then goes on to suggest that the president suffers from the sudden onset of extreme guilt syndrome, or EGS as it’s more commonly known to absolutely nobody. Many of the medical/political/hacky sack analysts at CNN and MSDNC say that Donald Trump’s case of EGS is most likely caused by the extreme guilt associated with being impeached and then getting away with it.
When reached for comment an anonymous White House spokesperson, allegedly, stated that the president is simply fed up with the whole thing. Between the fake news reporting fake news stories about his administration and Adam Schiff systematically exposing his every nefarious scheme to have Russia rig our elections in his favor to the world, it’s all but impossible for him to get his grift on anymore so he’s taking his marbles and going home. The President reportedly stated to nobody in particular that he is planning to steal Air Force 2 when he leaves Washington D.C. so that he can use it to commute from the White House, back to Trump Tower, and to get around Las Vegas, Nevada in. There he plans to leave it running and tied to the flagpole since there is nowhere to land it on the roof. The former president plans to live out the rest of his days and write his memoirs while ensconced in the Presidential Suite that, ironically enough, has his name on the door already.

It is not yet clear whether Mike Pence will also step down and allow Nancy Pelosi to assume the White House or not at this time, but hopeful rumors abound at DNC Headquarters. This also according to unnamed sources who could not be reached for comment. 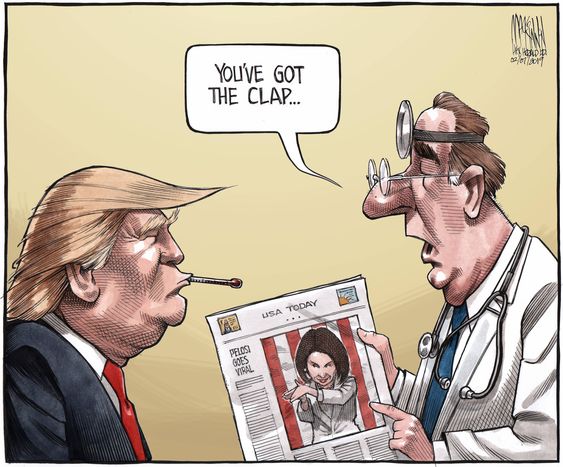 Haha, suckers! I got you again!

Greetings sports fans and welcome to our third annual April Fool’s Edition of Vegas Valley Sports Beat. That screwy little sports column that boldly supports woodchucks who would chuck wood if they could chuck wood. Sponsored by Morning Wood Lumber Company. Who reminds you that when it comes to making tent poles or any of your other hardwood needs no wood stands straighter than Morning Wood. Hands down, Morning Wood simply can’t be beat.

It’s a beautiful day in the neighborhood with the weatherman calling for a high of 92 degrees in Las Vegas this afternoon. It’s a beautiful day for a neighbor would you be mine? Could you be mine? Won’t you please, but stay on your side of the fence. But please, don’t be a stranger. Not when this is the time for all good people to come to the aid of their country. It’s amazing to see the many ways that America is responding to the coronavirus crisis at all levels. From the halls of government to construction, and manufacturing to medical personnel, and our police officers, firefighters, EMTs, and other first responders. Not to mention food service workers, grocery store clerks, teachers, recording artists, special volunteers, and people in general. All over the country, Americans are coming together in their separation, apart but united in isolation.

America owes a special debt of gratitude to our truck drivers who are out there on the highways and byways of America day in and day out pandemic or no pandemic. They bring the gas and the groceries, the milk and the mail, and a thousand other little things that most of us take for granted. Until they are out of stock at Walmart or gone altogether that is.

We are proving to ourselves as Human Beings that we really are the kind of people our dogs and cats believe we are. Despite what others might say about America nobody can say that we as a nation don’t have a united heart and soul unlike any other nation in history. E Pluribus Unum. From many, one. American.

Happy April Fools Day America and may God shed His grace on thee. Go ahead and prank away but don’t get carried away and hurt someone. Don’t let anything rob you of your joy. Take heart and be of good cheer. Look at how good we the people, how well America was doing before this pandemic struck. It is easy enough to get it all back on track again together. Just wash your hands after handling objects or touching any surfaces that might be infected. Practice safe social intercourse, and always practice safe regular old intercourse of course, and above all else, please be extra diligent about your own germs. Where are you leaving them, and who are you leaving them with?

Make no mistake about the seriousness of this pandemic or the seriousness of the threat it poses to everyone. Some more so than others but just the same we are all in this together whether you like it or not. It affects every life on this planet at this point in time and that is not to be thought of as being pshawed here. On the contrary. It is deadly serious to me because I know what it does to the lungs of the host. I have felt the loss of another’s loved ones already and it pains you to see your friends in such inconsolable distress knowing that there is nothing you can do or say to make it hurt any less. People my age are being separated from their elderly parents and then finding out they are going to die in there. Alone in isolation without any of their family members around them.

That is really and truly, unduly harsh and it breaks your heart to see it. But it cannot be allowed to break our spirit and cast a pall over the world as a similar one did just over a century ago. Even to this very day, children sing “Ring Around The Rosie,” in schoolyards all across the globe. That song is about the millions of people who died from that bug. We have the tools to fight this pandemic unlike no other time in the history of mankind so there is no reason for allowing this strain of Coronavirus, or any other flu bug to take the lives of millions of more people than it has to. Take some cheer and some chicken soup to a shut-in, volunteer to give a home health care worker a little bit of time off to themselves so they can take care of their own needs.

If you see someone who is down or if you are depressed then make it a point to contact that other person, or find someone else who is feeling down and make them laugh. If you have the time and the means perhaps you can pick up a few extra groceries while you’re at the store for someone who has to rely on public transportation, or who is shut-in and had nobody to look out for them. And do not forget the people who have been displaced and are now homeless and fully exposed to the ravages of this virus. Hand out soap, or perhaps a few sandwiches. Inform people who may not have access to the real news. Educate, and remind people of how to scrub their hands thoroughly with strong soap. The stronger the better. Whatever it is that you can do, do it. No matter how small a thing it might seem to be because it will make a huge impact on many lives including your own.

This too shall pass.

And soon so we should all be ready to kickstart the economy back to life again when it is all clear to venture out in public again. Be ready to go out on the town, take in a movie, go shopping, or have dinner out with the family. Whatever it is that you are going to do, look forward to doing it with optimism and don’t let despair run your life and ruin your happiness. If you cannot make your own happiness already then you’ll never have it anyway so don’t let the news of the day drag you down. Crying over spilled milk never puts it back in the bottle but a cheerful attitude and a positive spirit make all things better immediately. George Washinton was a firm believer in the power of both of these traits of the American spirit. Who can deny it? Not I

Stay strong and stay well Las Vegas. And that goes for the rest of America as well. This is our chance to really shine. Carpe Diem.

What A Difference A Day Makes.

YOU CAN’T KEEP A GOOD DOG DOWN