The score was tied at the end of regulation so the officials allowed the game to go on for an additional five minute period but when neither side could gain an advantage and score, the game was called a tie at 95 minutes.

I got to Cashman Field late due to my Google maps having a sense of humor as of late, and the parking lot was full. The lady attendant gave me directions to another lot but I was able to find a parking spot nearby and a short walk brought me to the will call ticket booth. I had some small trouble getting my press pass but the staff quickly cleared that up and now I’m the proud owner of a 2018 season media pass.

A great deal has changed with the team since their first pre-season home-opener which ended in a 2-0 loss to the Montreal Impact. But that one really didn’t count anyway.

Last night’s attendance was 9019 and that is the only thing that really hasn’t changed much at all since that first game. This one did count. This was the Inaugural homecoming game and the crowd was in fine form last night. Even the 24 kilometers per hour cold wind that blew across the field the whole time didn’t dampen anyone’s spirits a bit. 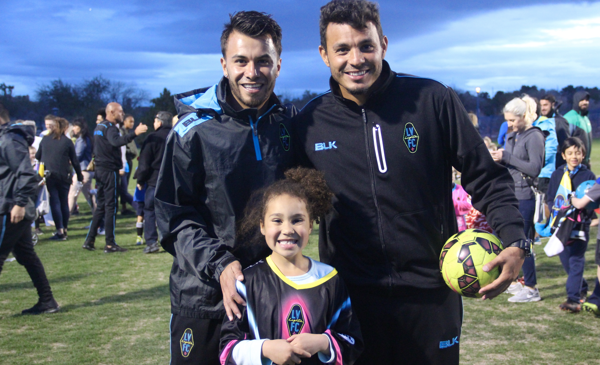 The drum and bugle corps was out in full force, balloons were flying as were many colorful flags. There was yellow, pink and blue colored smoke wafting through the air along with streamers and multi-colored confetti. I added some to that from some confetti I found in my coat pockets from the last home game against D.C. United.

The smells of hamburgers, hot dogs, french fries and other specialty foods that were wafting up into the press box were scrumptiously scintillating. If I was on a diet, last night might have proven disastrous. Happily, however; no diets were harmed in the making of this story.

There were thousands of excited and laughing children in the crowd running around on the pitch, banging slap-stick balloons together and gathering up confetti to throw back into the air. Many folks were on their cell phones sharing the game with family and friends in other places. Some families had blankets spread out on the outfield lawns where their children could run around and play. The joint was really jumping and the DJ was bumpin’ it hard.

What has changed markedly since that first home opener just 6 short weeks ago is the attitude of the players and the coach. A win surely would have been preferable, as it always is, however; it’s not just about winning a football game. I mean come on now this is Las Vegas we’re talking about here.

This town was not built on winners, we all know that. Who hasn’t heard that old saw at one time or another? Las Vegas is unique among all other sporting cities in that we have everything here. If it’s not already in Las Vegas it’s being built, bussed or otherwise shipped in even as we speak.

The tourists can have the slot machines but as a local, I know that I personally want to have a great time when I go out for the evening with my family, or with friends. I get enough stress at home and at work. Okay, maybe not at my work so much but that’s beside the point.

Coach Sanchez is awesome. You simply have to admire and respect his passion for his team. And they are definitely a fine bunch of young men. They have consistently picked up the pace with each passing game and they hustle for the entire 90 minutes without let up. They showed some exciting defensive moves that the crowd certainly loved and applauded. Our goaltender is one of the best as well. 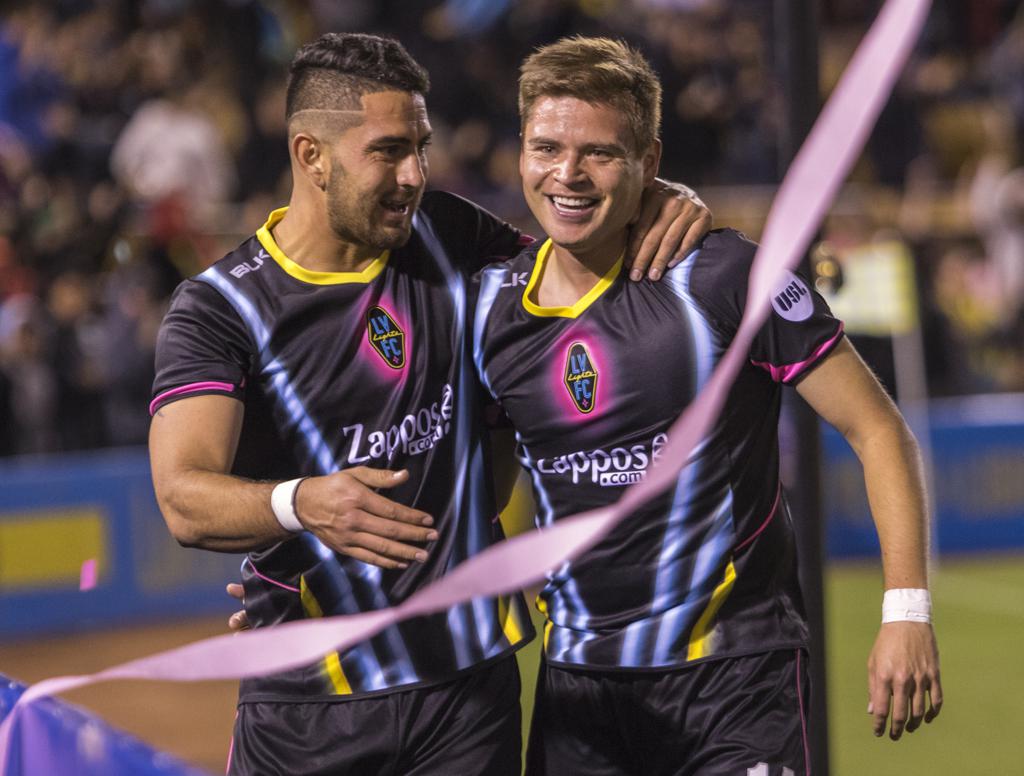 This subject was raised at the press conference following the game and both of the players and even Coach had to admit that the crowd makes all the difference in the world. We got a tie that’s certainly better than a mark in the loss column.

The most important thing is what the fans will remember 20 years from now when all of this is old news. Will they remember that it was Alex who scored the only goal of the night for the Lights? Will they remember who scored the only goal for Reno? I personally couldn’t answer that question right now at gunpoint. To tell the truth, if Alex hadn’t owned up to making that goal at the press conference I’d really be in hot water.

That’s truth in journalism at it’s finest but that’s life.

Even if I had gotten to the pitch on time and all things were equal. Win, lose or draw, wind or no wind. Whether it’s hot, cold, raining, or whatever there’s no doubt that Las Vegas loves its Lights and it’s easy to see and understand why.

As I walked through the stadium and out to my truck (parked way over yonder) nobody was crying in the aisles or in their beer. Nobody was out in the parking lot lamenting the tragedy of the tied game. There were, however; some members of the afore-mentioned drum and bugle corps that were hanging out and beating on the drums. Made me wish I had my marching snare again.

Many children will be born, undoubtedly more than a few of them being some direct, or indirect result of the all the fun one of the many couples in attendance had last night and in the countless Saturday nights still to come. That much is very certain.

Cashman Field will soon undergo a makeover that I am personally excited about, being myself a Building Inspector, and the area around the field will surely prosper and grow from the renovation and the jobs it will bring to the area. New homes will be built as will new business, and industries. Traffic will undoubtedly still suck but, c’est la vie.

Much will change that is certain but the one thing that will surely remain the same is the atmosphere that surrounds the game itself. The air last night was charged with electricity and the smell of deep fried Scooby Snacks.

20 years from now everyone who was there last night will be like Coach who? But ask them who won the dance off at half-time and I’ll lay you fat odds that few will have forgotten the young man who stole the show hands down. The names will change but the memories and the smiles they bring will remain. That is certain.

The staff at Cashman Field, the team, Coach, owner Brett Lashbrook, and his staff, Ryan Greene, and everyone in the press room,  the concessionaires, security, and Metro PD/Fire-Rescue they are all crack team who work admirably well together and make the games what they are. Delightfully fun.

Cashman Field is a wonderful venue that’s easily accessed and small enough to be cozy compared to say, Dodger Stadium. Even the parking lot attendants had their act together last night and were very helpful with giving me directions to the overflow lot along with everyone else who was trying to get to the game behind me.

As a fan, I, of course, will be delighted with every victory won, and I will agonize with you over every defeat. Ties. I guess we’ll have to remain evenly divided about ties but hey it’s not a loss. WOOHOO! I love the game but that really wasn’t what I came for. I came to hoot and holler for my team and to have a good time and I definitely had that. I know that everyone else did as well because I saw you and you were smiling and laughing.

The Las Vegas Lights FC have trapped lightning in a bottle and next Saturday night they’re going to let it back out again when the Swope Park Rangers come to town. That much is certain

As I have said before; I will say once again.

WHAT’S UP WITH THE COWBOYS? NOTHING TIME WON’T FIX.

EVERYONE IN – JOIN THE FIGHT AND MAKE A DIFFERENCE. LIVE ALL IN NOW.