Greetings sports fans and welcome back for another thrilling adventure in sports and world news journalism you all fondly know of, and so love, Vegas Valley Sports Beat. That fiesty little sports column that dares to go the extra mile to bring you a constant variety of news and sports if not then on any kind of regular basis. How I wish that this was not the case but it seems like every time I take one step forward I get knocked two steps back again. But I keep on getting back up and slogging onward, ever forward.

This is due to my having broken my back in four places almost a month ago. I was mounting a horse when she got spooked and before she could be brought under rein again I was thrown from the saddle and landed on my back on my lower right side much like the cowboy in the lead picture, fracturing the Transverse Processes from the L1 through the L5. I also damaged my elbow and shoulder and the doctor said there was some swelling in my scalp. They told me not to bend down or lift more than 10 pounds and to take Tylenol for the pain. That’s not even funny considering I only have one kidney and cannot take Tylenol because while it has no harmful side-effects it causes the remaining kidney to work too hard which can damage it over time.

Since that day I have been mostly unable to work at all due to the extreme discomfort of trying to sit at a monitor and write, and writing from a recliner was no better. I was just getting back into the swing of things when I had to move suddenly because of a foul odor that made it impossible for me to continue residing where I was. Getting WI-FI set me back another week but now here I am back again and ready for the next set-back. To be clear I was not in a rodeo when I was thrown, I was exercising a very sweet and gentle Buckskin mare named, Just A Lady, who just happens to be very skittish through no fault of her own. Thankfully, she was not injured.

The 8-second reference is an inside joke from the accident, but the injuries are very real and very painful, and that was my last time sitting on a horse that isn’t made in Milwaulkee of American steel and breathing fire.

When they gave me a CAT scan at the emergency room they found a growth in one of my lungs. My Oncologist says it’s too soon to tell anything so I have to wait 3 months and see if it grows any more. I hope it likes marijuana because I have a full gram of Chocolate OG and a pre-roll of WhoOodie to review for LV Cannabis Reviews Dot Com after I sign off here. Life can’t be all bad all the time it upsets the delicate balance of nature, so it could be much worse but for the grace of God. The marijuana not only eases the pain of what I call being conscious, but it is also a cancer inhibitor taken in low doses. That means it most likely died of a THC overdose sometime last week when I was reviewing the Nepali Pink, Strawberry Cheesecake, TKO, Shiva Skunk, Mango Kush, and Sherpa Derpa strains.

Let us now turn our attention to the wonderful world of sports. Particularly the NFL and the beleaguered Dallas Cowboys who’s season is coming to a close far more rapidly I think than Jerry Jones and the Cowboys would like to see, but there it goes. It’s all but in the wind and another year of playoff hopes are dashed upon the jagged rocks of reality and gone once again. Hopefully, they will at least find a way to beat the Philadelphia Eagles and the Washington Redskins in those upcoming games and perhaps salvage some semblance of dignity from the rest of the year.

Normally I might laugh, nay, scoff at the very idea but I am happy to report that there has been a major breakthrough in the mental health of Cowboy’s owner Jerry Jones who on Friday called into radio station KRLD/105.3 The Fan to express his frustration over the Cowboys three straight embarrassing losses to teams that they were clearly capable of beating. He emphasized this frustration with several choice expletives while on live talk radio. 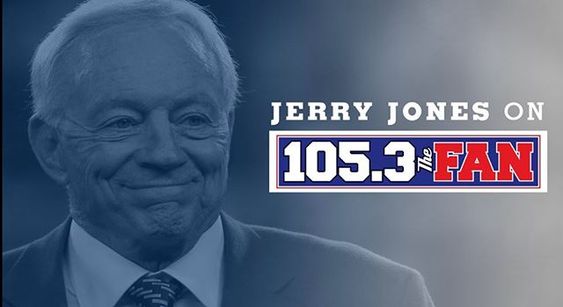 “Get your damn act together yourself,” Jones snapped. “Now, we’re going to have a good visit this morning. But settle down just a little bit. We’ve got a lot to go over. Now, go on with your question, but I’m going to give you the answer I’m going to give you this morning. I don’t like your attitude. I’ve been traveling all night and I don’t have the patience to jack with you today.”

Then he was asked if he’s tired of questions about Jason Garrett’s job security?

“Of course I understand why they come up. Our fans are interested in what — they’re frustrated that we’re not playing better and I understand that and know. That goes with the territory. And, so, I fully expect to have those questions and I know that if you really think about it, if I did have answers as to different directions regarding talent, if I did, I would not share them right now.

“As far as quitting on Jason Garrett, you have to remember that when you quit on your coach then you quit on yourself because we’re all a part of this,” he said. “And you’re absolutely right when we started this show, the one that deserves the most responsibility is the one that ultimately makes the decision to put what players out there and put what coach out there. That’s the general manager and in this case, happens to be the same man that owns the team. I completely understand the fans’ frustration with me.”

Are you concerned that apathy is setting in among fans?

“Oh, I’ve seen the opposite. I’m seeing a hell of a frustration from the fans. And I’m seeing it from everybody involved here,” he said. “But I understand that. I just told you. I would have expected that. And I know good and well there is anybody in the NFL that is more responsible for what’s going on out on the field than me. And, so, I certainly have that kind of frustration as well. What I do is I get mad. I scream in my pillow. That low, low eerie thing you hear going across Dallas that’s me screaming in my pillow. And, so, the bottom line is you can imagine I’d like to make this better.” Read more.

Realizing and admitting that you are a major part of the problem is a huge step towards resolving the issues which this raises in the Cowboy’s line-up. There is no doubt in anyone’s mind that the Dallas bench is loaded with talent. Ezekiel Elliot stinks but there is still no reason for the poor performances the rest of the team has been putting on the past three weeks. The controversy Elliot brought into the locker room during training camp was uncalled for. He stayed home like a Prima Ballerina and demanded more money to put on the show that is Ezekiel Elliot -Super Star. He got his money but has yet to show anything of value for it.

Then the team could not seem to execute and Dak’s timing was way off which lead to a lot of missed passes and lost chances to score and perhaps win. Jerry Jones might own the team but that does not mean he gets to make it an unhappy fiefdom full of unhappy fans, coaching staff, and players alike. The Dallas Cowboys belong to America seeing as how they’re on TV and compete with teams from other cities and states and we love them and support them spiritually and financially we the fans have a vested interest here too. We take a lot of crap off of the fans from rival teams. Something Jerry Jones never has to deal with in his ivory skybox suite. I have and I know that other fans have as well.

There is General management of a team and then there is the micro-managing control freak that is Jerry Jones. I would still love to know what the hell he was thinking when he let Jimmy Johnson go on the heels of 2 Super Bowl victories. It was because Coach Johnson failed to salve Mr. Jones’s ego in front of the other owners so I guess it’s possible that it has happened to Mr.  Jones after all and he doesn’t like it either. And don’t even get me started on the interminable Tony Romo era I thought would never end.

What is needed is for the entire team to bring themselves back together as a team and get it together. Whatever the seeds of this apparent discord are they can be weeded out and the Cowboys can easily live up to their potential by working on play execution and the split-second timing of passing routes. Throwing to a receiver who has his back to you clearly illustrates that this and a decided lack of communication is the problem.

Coach Garrett has to be able to coach without being undermined by the front office all the time. This does nothing but breed contempt for the coach and for Jerry Jones of course and throws the entire team off balance. When the Cowboys are on a balanced attack between the offense and the defense there is no stopping them. Jimmy Johnson had that balance worked out and Jerry Jones pissed it away over an egocentric fit of monumental stupidity. Coach Garrett has the tools, the staff, the facility, and the ability to attain that balance from this current class of Cowboy players. Until Jerry Jones finally understands that as GM it is not his place to badmouth his coaching staff or players but to get them going in the right direction and keep them going in the right direction I guess there’s always next year and that hope that springs eternal within the human breast.

Jerry Jones interview reprinted from:  https://www.star-telegram.com/sports/nfl/dallas-cowboys/article238117439.html whom we thank most graciously for their professional courtesy, and for whom all rights are reserved.

Statement by Donald J. Trump, 45th President of the United States of America For 9/19/2021